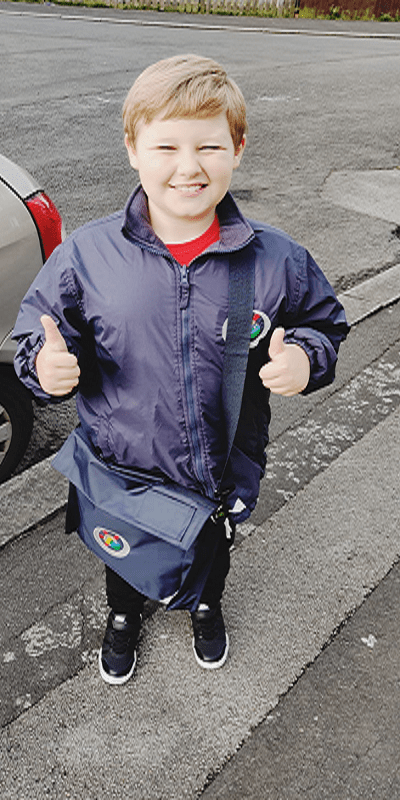 It’s that time of year again, the one we all dread…The first day of term!

Going back to school after the weekend is hard enough, but after 6 or 7 weeks it can be an impossible ask. Our children benefit from routine and when there is a change in that routine it can cause so many problems.

Luca attends an autism specific school that we are lucky enough to have close to where we live, and while the teaching staff are amazing at understanding his needs, summer holidays are still an inevitable part of the school year and something that causes anxiety. sleepless nights and behaviour changes every single year.

At the end of each school year we are given a transition booklet which tells Luca who his teaching team will be, shows pictures of his new class room, where he will eat lunch, and what the cloakroom looks like. This always gets stuffed in to his bag and he will refuse to acknowledge it for the entire 6 weeks he is off school.

The first week of the holidays is usually ok, Luca is excited to be off school and able to play with his games and have fun at home all day. Week 2 is where the problems start, and although we do have a “home routine” it is different to the one he is used to at school. Sleep is the first thing that suffers, not that it was ever great to start with! The usual bedtime would see Luca in bed at 8:30pm, and if we are lucky, he will be asleep by 10:30pm. He will usually wake at least twice overnight for varying lengths of time. He will wake up for the day anywhere between 4am and 7am. That usual sleep routine goes totally out of the window by week 2 of holidays, along with any hope of sleep for us. Luca goes to bed at the same time but will still be awake at midnight. Then the fears start and we are up for hours because he is scared of literally everything. Then he gets really clingy with me and wont leave my side and panics if I leave the room. Luca’s anxiety gets so much worse to the point that he feels his heart racing and wont want to leave the house. Stimming cranks up several notches and any progress he has made with social interaction takes a huge back step and by the time we are ready to start the new term we feel like we are back at square 1 again.

We have learned from the last few years and have put some additional measures in place to help Luca with the holidays and they have helped. We don’t need to use a visual timetable outside of school during term time now, however this will come back out during school holidays. We always plan ahead as much as possible and make sure we talk about any big plans such as days out, or family visits as much as possible. At bedtime we will talk about the day that we have just had, and go through the plan for the next day while showing Luca the Visual Timetable. We make sure we go through any potential scenarios for the day including what may happen if plans have to change at short notice (Fingers crossed that never happens) and what we can do to feel better if it does. We always carry Sharkey (his comfort toy since he was born) as well as his iPad (worth its weight in gold) his ear defenders, and a bag of sensory toys (spinning light toys work well for Luca)

Because summer holidays are our busiest time at work, we never plan family holidays during this time, however staying in the house makes things worse for Luca, (even though that is what we would prefer), so we make sure we plan days out and trips to his favourite places. We do have to make time to work, and as we are a family run business we manage everything ourselves so careful planning is essential for us. We are lucky that Luca and his granny are so close and he will happily spend days and the occasional night at her house which gives us the time we need to catch up with our day job, as well as the charity work we do. It also helps Luca spend time out of the house and socialise with someone else, even if they do talk about computer games, mining and world war 1!

Around 10 days before Luca is due to go back to school, we will bring the transition book back out of the bag and initially leave it within eye sight of Luca, just so that he acknowledges it. We will then actively talk about School and how nice it will be to see his friends again, and discuss the things he may learn about in the new term. The next stage would be to go through the booklet and look at the pictures of his new teachers and support team. This usually does not produce a great response first time around, however we will continue to do that for a the week leading up to the first day back. Now that he is older and communication is easier for him, he will eventually start to ask question or say that he is nervous, and we can then put some strategies in place to help him manage those worries.

I dread the morning of the first day back, even getting Luca out of bed is difficult – probably because there has been no sleep the night before. We have tears and panic all morning, its heart breaking to see your chid so distressed. When Luca a little younger he would go back to school dressed a different character, this was helpful in 1 way as it would enable Luca to feel confidant to go in to school, but because he would go in character and not as “Luca” he was disassociating with school which ultimately wasn’t helping him. Luca also has a habit of closing his eyes when he doesn’t want to be in a situation or conversation – he spent his first ever day in year 1 with his eyes closed! He will still do this now, so eating breakfast with eyes closed is always interesting!

We know that once he is in school he tends to settle fairly quickly, however he wont engage in conversation willingly, or play with the other children – that tends to take a few weeks. New teachers also take a while for him to get used to and I guess that works both ways, the teacher will also need a few weeks to get to know Luca and the best way to engage him in the class teaching.

Compared to where we were at the very start of primary school, things are better, but that doesn’t mean it is in any way an easy or pleasant for Luca or us to go though every time school holidays last longer than 2 weeks.

We are lucky that we have a school that understands the difficulties faced by autistic children when changes of routine occur, and there are strategies in place within the classroom and the school environment as a whole, that mean they are able to help manage any behaviours that happen as a result of anxiety that is caused by the changes. We have been through 8 months of complete school refusal before Luca started at at his special school 4 years ago, and although nothing will quite compare to how hard that time was for him, extended school holidays come pretty close!

for all those that attend school, I hope you all have a calm and successful start to the new school year.