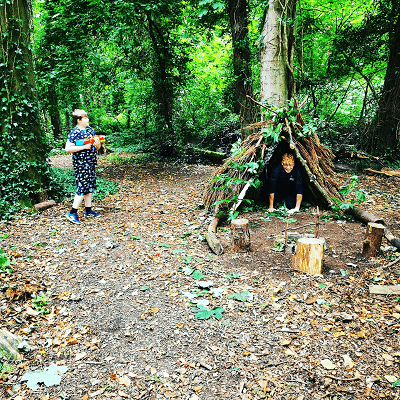 There are lots of things that Luca enjoys doing when we go to Haggerston Castle on holiday, he just may not do them the traditional way and that’s ok, It’s his time to relax too and he can holiday any way he feels comfortable.

Luca doesn’t really enjoy being around large groups of people, but he loves the Nature Rockz area of the park. The nature area is a woodland section of the park that you will see as you drive in. They do lots of ranger led activities like den building and bug hunts. Luca’s favourite thing to do is to take his water shooter and go walking around the woods looking for Big Foot, we do this every time we are at Haggerston Castle. The staff team tend to stay the same each season, but due to the increased demand for holidays this year, there are some new faces on the staff team, including new rangers. We were a little worried that this would stop Luca from enjoying his usual Big Foot hunt but thankfully it didn’t.

Because Luca doesn’t immediately engage in conversation, it can seem to other people like he is “being rude” or ignoring people when they try to talk to him, but this is part of Luca’s autism, he finds social interaction difficult.

One of the new staff members, Ranger Tom, saw Luca walking around the Nature area setting “traps” for Big Foot and came over to try and talk to him. Tom quickly realised that wasn’t going to work, so instead he automatically involved himself in Luca’s game. He found a way to engage with Luca by showing him the best trees mark with his water shooter, and they both went off to explore the den area because obviously that would be a good place to camp and wait for Big Foot! Tom even suggested that Luca test the den that he had built earlier that day was waterproof by crawling in to it while Luca squirted it with water! 😂

Luca had such a good time, and Ranger Tom was so happy that they had been able to play together for a while. We decorated a stone and added it to the gnome garden that Ranger Tom is building, see if you can spot it next time you’re there 💜

Inclusion doesn’t have to be difficult, it just needs someone who accepts and understands