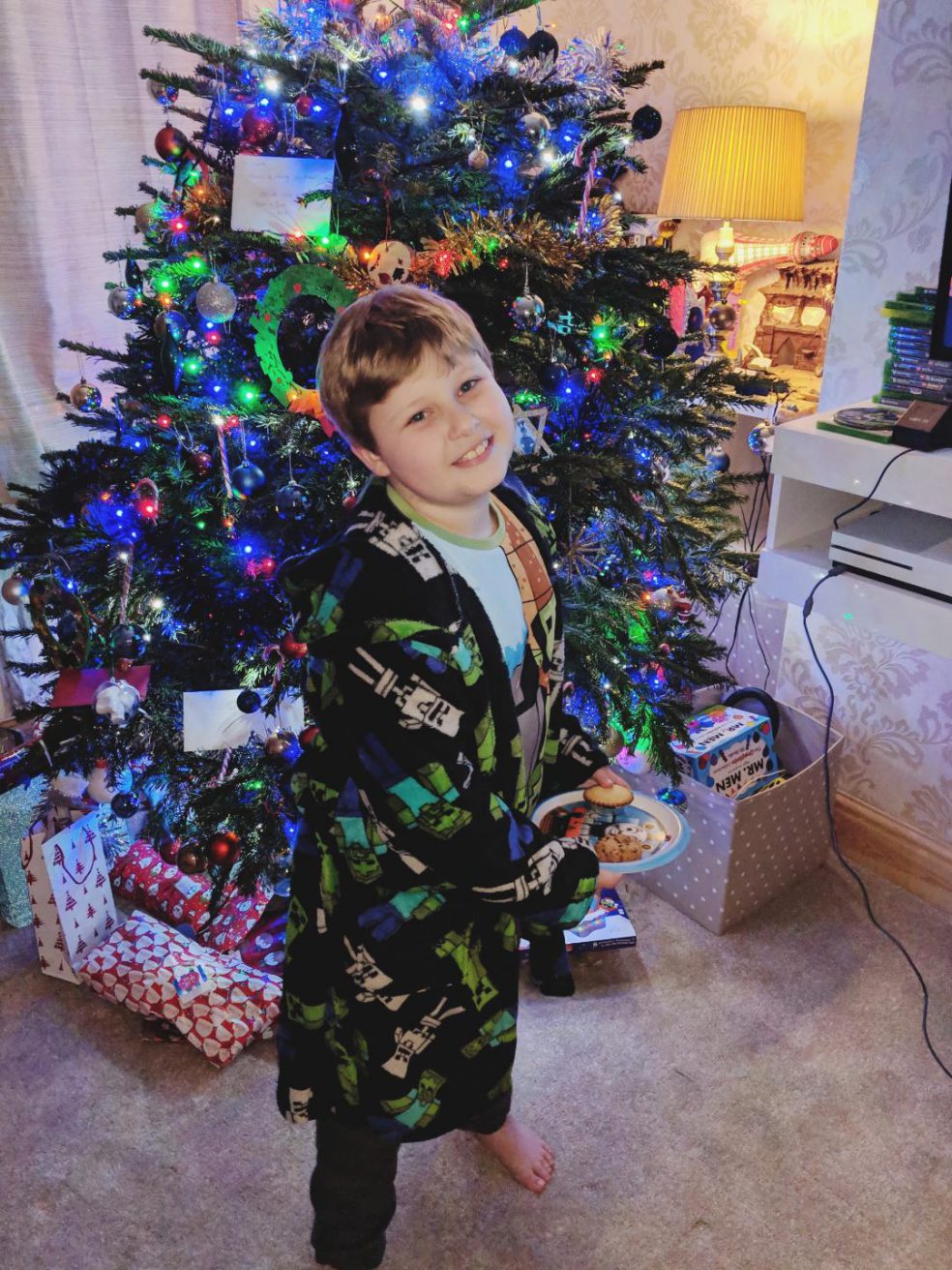 Christmas can be a magical time for a lot of families but it can also be a really difficult time for autistic children. Most people when they think of Christmas think about spending time with family, or going to family parties, enjoying the time off work/school, building up the excitement for the big day and decorating the house. All these things, while, manageable for some, will be a cause of great stress and anxiety for many.

Tasks such as shopping can be made harder at Christmas time as there are often carol singers in the stores and staff dressed up in costumes. Shops get extra busy around this time of year which makes a sometimes already difficult task impossible for some……online shopping is a God send for us.

Christmas eve is a loooong day in our house, we have had weeks and weeks of build up by this point (and usually meltdowns) to get to this point and you just know that sleeping is not going to happen very easily. We tend to do our family present drop on this day too. Luca packs up the gifts we have bought for family and we spend the afternoon dropping them off at their houses so that Luca isn’t overwhelmed with visitors.

After that we try and stay as calm and relaxed as possible, We used to put his presents from family and friends under the tree but they proved too much for Luca, and even though he knew he couldn’t open them until Christmas day, it would be too distracting for him and he would want to pick them up, shake them and open them. It would make him anxious and he didn’t really understand why they were there when it wasn’t Christmas day yet. He understands a lot better now so we have started to put them out again – so far so good

We find a distraction for Luca for the rest of the night, sometimes its popcorn and a movie of his choice but usually its reading books about Minecraft or playing Minecraft.

Last year we introduced buddy the elf, I hoped the routine of having the elf, and Luca having to go to sleep so that buddy could “report” back to Santa would help. I was a bit worried that Luca would panic that a toy was coming to life and moving things in the house …….turns out that was just my fear! It worked quite well, Luca loved the elf and it did help his night-time routine so Buddy has made it back this year too.

Christmas day – This has historically been a challenge. It’s taken us a few years to find a way that works for Luca. In the early days when Luca was about 4, he started to find the changes at Christmas too much to manage and it seemed to scare him a little. I remember on Christmas day he wouldn’t come downstairs in the morning and it took us a few years to realise that he was scared Santa would still be in the house. He wouldn’t open his presents and didn’t know what to do with himself. The first year this happened, he took himself over to his train table and started to line up his Octonauts paper cups that he used to play with, over and over again.

After an hour or so we unwrapped a toy and gave it to him, he looked at it and wouldn’t pick it up at first. It took us all day to open his presents as he would look at one, eventually pick it up and play with it and refuse to look at any more. The following years we learned to just allow the whole day for opening presents and the bigger gifts were left unwrapped as we found the anxiety of wondering what was inside was too much.

We used to go to spend Christmas day with family at their house but after 2 attempts we decided it was only detrimental to Luca as it was too much pressure to put on an already struggling child.

Now that Luca is nearly 9 and we’ve had years of learning how best to help Luca manage his day we have a routine that works. Luca gets a Christmas eve box with pyjamas delivered to the door step from Buddy the elf, it’s a way of saying goodbye so that there is closure to that particular routine. We then put out Santa and Rudolph’s snacks for the night and go to bed with a Christmas story…..Of course, Luca doesn’t sleep all that well and we are awake more than we are asleep, but he stays in bed no matter how excited he gets.

In the morning we get up and go downstairs, we still have to assure Luca that Santa is no longer in the house. We then open presents over the next few hours, he likes to take his time with each one before opening the next. We stay at home and tend not to see anyone which works well for us. When family would come over with presents for him he would take the gifts, open them and put them straight down again, sometimes without saying anything and sometimes he would say “ I didn’t ask for this” People used to think he was just being rude or ungrateful but it was actually really hard for him to be watched by lots of people opening gifts he didn’t know about and then knowing what to say afterwards. We know just ask for his gifts to be dropped off or we collect them on Christmas eve to put with his presents on Christmas day.

However you manage your day, I hope you and your family have amazing Christmas! it doesn’t matter what your Christmas day looks like as long as it’s a happy one!