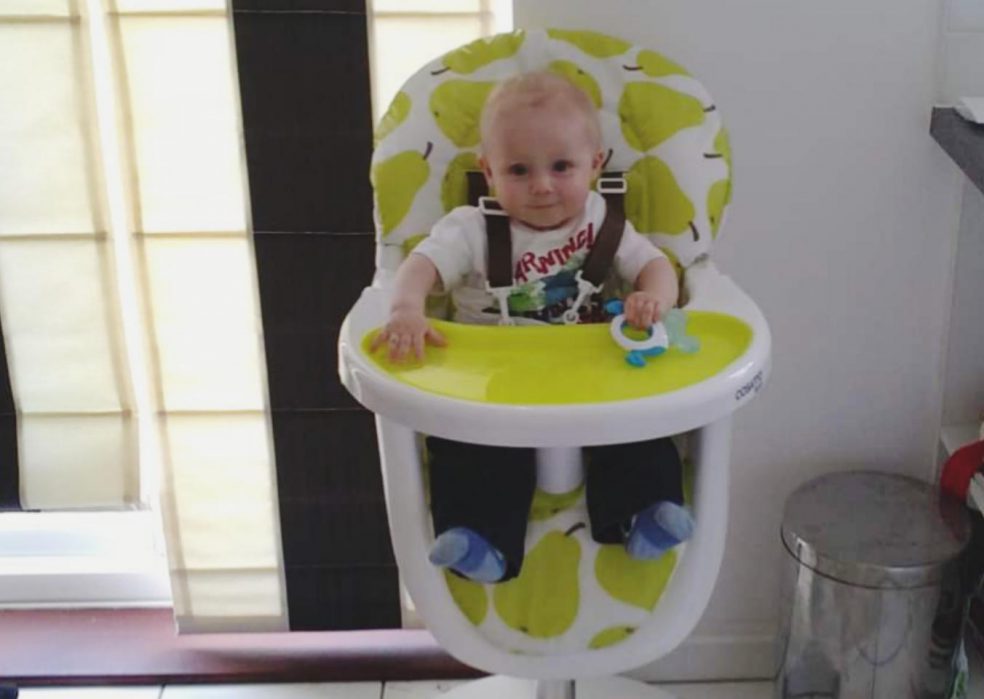 I had never heard of sensory processing difficulties, sensory issues, sensory needs etc until Luca was born. Looking back, I now know that he has been experiencing sensory difficulties pretty much since birth. When I was 16 weeks pregnant a routine scan picked up that Luca had antenatal hydronephrosis (basically both his kidneys were enlarged) After the initial panic I was reassured that I would be scanned several more times during the pregnancy and when Luca was born he would have a kidney scan and be given antibiotics to prevent kidney infection, which went on for 5 days.

Luca started to have feeding problems from his first feed (That highchair in the photo turned out to be an absolutely useless buy but he looked cute in it!) the amount of milk he was taking was quickly getting less and less until he was surviving on 5ml of milk every 12 hours and what little he was having was making him sick, it was almost as if he couldn’t stand the breast or bottle teat in his mouth. At the time I put this down to the anti-biotics and the fact that I had to give them to Luca orally might have somehow caused him to reject his feed as he related it to the trauma of the medication……. I honestly had no other explanation.

Luca became quite poorly over the next few months and despite many visits to lots of different professionals, no one could tell me why my baby wouldn’t feed. Eventually I took Luca to A&E after 2 days of not feeding and thankfully he was seen by the on-call paediatrician who listened to his history, witnessed him refusing to feed and agreed it needed further investigation as an inpatient. Over the next 2 days we were seen by several specialists and Luca was diagnosed with food allergies and prescribed a high calorie milk as he was very underweight. Luca did take to the milk much better but would still refuse to be accept the bottle teat and would push it out of his mouth…..at one point I was spooning milk in to him just to get him to eat. Anyway, forward on a few months and I started to wean him on to solid foods………that was an unmitigated disaster!

First stage baby porridge was too much for him to manage and he would retch as soon as it hit his tongue. I went through every type of baby food, both home-made and store bought but he could only stand 1 particular brand of puree food (I should’ve known then about what lay ahead really). Over the next 3 years I had to gradually add 1 spoonful of next stage baby food in to his puree to up the amount of solid food he was able to tolerate without him retching and throwing up. Luca never picked foods up to put in his mouth nor did he ever ask for food. At nursery he would go all day without eating if he had been allowed.

When Luca started to walk, he would refuse to walk on certain types of flooring and later on hated walking in the beach and hated shoes with a passion! He doesn’t like messy play and never comes home covered mud or paint. Loud noises are a big trigger for Luca and he wears ear defenders quite often.

We still struggle with food now, Luca will eat soft bland foods mostly and isn’t keen of finger foods that he has to pick up without a fork. He hates crunchy textures and is very reluctant to try new foods……sausage and smiley faces are as adventurous as he gets.

When I look back on those days, and trust me I promise it gets easier for anyone going through the same. I honestly think all of Luca’s feeding problems can be put down to sensory processing difficulties. Luca still looks like he’s being poisoned every time he eats but at least he is eating and is no longer underweight so if I have to put up with a him looking like he’s competing at the word gurning championships so be it!

There is more information on sensory difficulties here.